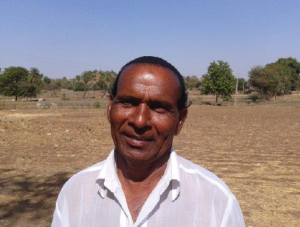 “When I was very young, I had a desire to serve Jesus. I did not know how or when, but I was just excited about sharing Jesus. I think I was in grade V, when this thought entered my mind. With little or no encouragement in those days for me to study, I studied another year and then decided that I would help my father in his fields. With little or inconsistent rains, our farm could hardly produce for our own family. But that was a good place to develop a servant’s heart.”

But as he continued to help his father, his heart was always burning for Jesus. Finally, he asked leave from his father and began to preach the good news from village to village. No one asked him to, but when he saw a need for healing, he was there praying fervently. And each time God answered his prayers.

Within a few years, he was being known as a man with ‘healing power’. God showed him villages in his dreams, which he would walk to and pray for people. Before He could leave those places, he would have a handful of people worshipping God. This kept on going for some time, until he met Dr. Thomas Mathews, who challenged him to release young men in these places to take care of the work.

His first trainee now has over 300 believers, who himself has released another four pastors under him. Ask him how many people would he have baptized in his life time as a direct result of his ministry he says, “It should be a few thousand, but what is it compared to the work that remains”

Two years ago, he had an accident and soon an operation was recommended for his stomach. Both these personal incidents were supposed to hit him bad. In fact he says,” I called all my family around me one day and told them that I was ready to meet my Lord. I was sad yet I was ready. And they all began to cry.”

That very night Deepa had a dream. He was very weak physically and emotionally but the dream shook him to the core.

In the dream he heard someone asking him to read Ephesians 5:14. Before he could open it, he saw the words “Awake O sleeper and rise up from the dead and Christ will give you light.” That word was enough to raise him from his sick bed. It also gave him a new zeal to preach the gospel.

Today there is not one single day, he does not go to a village to preach or to meet his protégés. He is there visiting them, encouraging them and removing their doubts. His one passion now is to see people getting saved and ministers uniting in vision and purpose.

As a direct result of his ministry, over thirteen pastors have been appointed to church plants and he continues to preach, plant and place, a truly apostolic ministry and a true apostle.

He still does not have a house of his own. His children have moved on and he and his wife live in a mud hut, which they are desirous of renovating into a three room basic living unit.

Reaching India with the Love of Christ